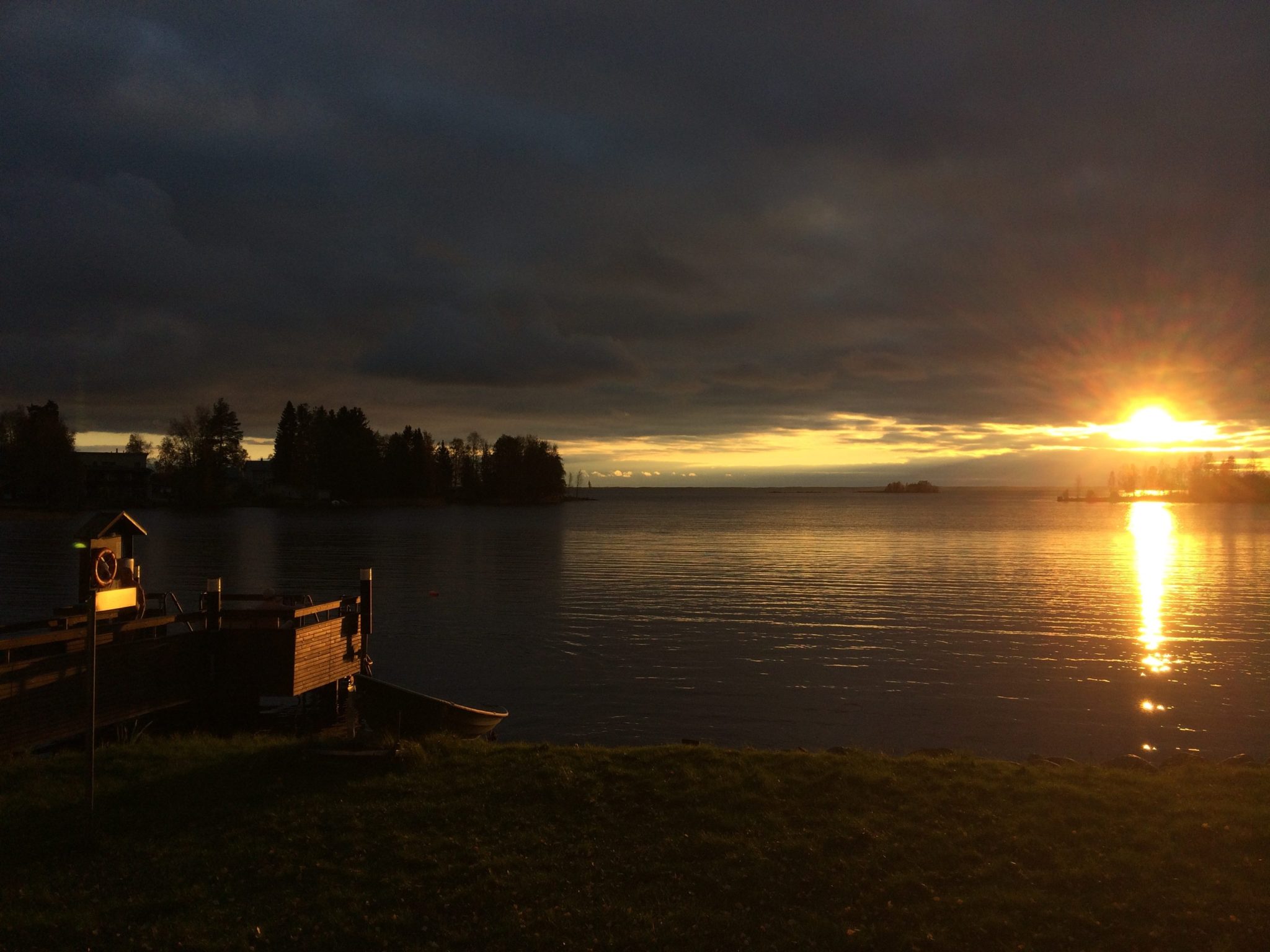 Yesterday was the first time in while I’ve been in Jääkarhut. It’s a really especial place and quite singular, or at least it’s what I’ve been told. It’s really true that at least the scenery, if the weather is favorable (I don’t mean necessarily sunny), it’s really awe and jaw-droping, as you can see in the header image of the post or in the image below.

Jääkarhut is a swimming club in Joensuu that is located in the Southwest part of the city in a bay with a quite narrow access to the Pyhäselkä, which make it a really nice and quiet (what is not quiet in Finland?) place to swim because the water it isn’t insanely cold. Ok, sometimes it’s, but not always. I say that it’s a swimming club because it’s how they define themselves, but the reality is that they are more than that.

Jääkarhut means polar bears in Finnish, a name that it’s quite accurate for the club, since the purpose is to swim all year around in the lake, even when the lake is frozen. They even organize competitions. At the end of the jetty there are a couple of hoses connected to a pump that move the water all the time to keep the avanto (a hole in the ice) open during freezing temperatures in winter. You can see jet stream caused by the pump surfacing a little bit in the photo on the right. You have to imagine that temperatures in Joensuu are usually around -10 ºC or -20 ºC in winter months, and they can reach during a couple of weeks less than -30 ºC.

On those months are when more pleasurable the experience is. When temperatures are inferior to -10 ºC the water of the lake is warm in contrast with the outside temperatures. You have to think that as a liquid, with a quite compact structure and high density, water needs to lose a lot of energy from its molecules to freeze and for that reason lakes and other water bodies just freeze a thin crust. I say thin because and some point in winter the ice can have more than 40 cm of thickness, and cars can drive over the lakes. The trade-off here is that being more dense, water makes you lose more energy (temperature) and the cold sensation is much more greater than if you are standing outside, even when the water isn’t usually less than 2 ºC and outside it’s -20 ºC. Something that, if I recall correctly, is related to the heat capacity of the matter.

But… are we crazy or we have been drinking too much vodka to start swimming in the lake in winter? No, the secret is that Jääkarhut is more a sauna club than a swimming club, at least for me and I think for the bast majority if the mortals around here. At the other end of the jetty there is a big cottage with a really nice sauna and big warm stove that usually heat the sauna until 80 ºC. Therefore, the trick is to go to the sauna and stay there enjoying the warm for 5’, 10’, 15’ or whatever you want to stay and then go to the freezing waters and have a quick dip. That is how most of the people survive. Here, it comes one of the biggest differences between the people who goes to the club. Some of them are real Jääkarhut, polar bears, and go to have a dip before they go the sauna, but others, like me, are Saunakarhut, sauna bears, and usually go to the sauna before we have our first dip in the water.

Sauna + avanto (or at least a cold shower), is one of the most relaxing things you can experience in your life and I highly recommend it. In Finland, saunas are something really sacred, and almost every building have a sauna, so it’s really customary to have a sauna at least once a week to clean your self. That doesn’t mean that you don’t have a daily shower, as you should, but that you have an extra once a week. However, my biggest reason to go the sauna is the relaxing sensation you have after you enjoy one, even more if you go the avanto and in the particular case of Jääkarhut the social and visual aspects. Usually, you don’t go alone to the sauna, and if you go is perhaps a good place to meet other people and chat. Sauna is a social place for Finnish people as much as the bar, or even more, and it’s where they are more chatty. Besides, Jääkarhut has one of the most stunning views of the sunset and it’s really a pleasure to enjoy it, it the weather permits. I’ll try to write a little bit more about saunas in the future because they a whole universe here in Finland.

Returning to Jääkarhut, it’s not special only for all what I’ve already mentioned, but because as a sauna / swimming club it’s really unique in Finland, and as far as we know there is nothing similar in the rest of country. As I’ve mentioned there are millions of saunas in Finland (private and public) and probably at least a hundred, or more, sauna / ice swimming clubs. I don’t really know about a latter figure, but guess that almost every city has something. Nonetheless, Jääkarhut is the only one open to the public completely and that you don’t need to be member of the club to be able to enjoy it. Usually, in other clubs you need to pay a year membership to enjoy the facilities, or at least you have to attend with a member, as a sample. Here, you just need to buy a ticket in the machine inside of the main house and you are ready to enjoy. The price is quite cheap, for Finland, 6€ and you can swim and use the sauna all your want that day. You’ll have access to the changing facilities too. However, if you want to enjoy a hot shower after your sauna and swim you have to pay and extra and insert 1 € per 2 minutes of a hot shower.

Another great thing of Jääkarhut is the broad operation hours, it’s usually open until 11 at night and you the ticked machine can be operated with cash (coins) or calling from your phone, it’ll charge the amount in your phone bill, bu you have to have a Finnish number. Also, be aware, that from 10 to 11 PM there is usually held the kuumaryhmä or hot group. Nothing sexual here, not worry. It’s usually when the regulars get together to have an extra hot and humid sauna. As much water you pour to the stove (within a reasonable range) the more humid is the sauna and the head is better transmitted to your skin, even to the point that you can feel a little bit of a scorching sensation. If you are new to sauna, don’t go at that time, you aren’t going to enjoy it at all although the people is really friendly and even sometimes they want to mock and kid new participants. If you want to try the kuumaryhmä, a good tactic is go a little bit earlier and enjoy at least half and hour of normal sauna, to then be introduced to the hot session.

Finally, you need to know that the place is not open always. They have an events room in the second floor of the main building that they rent, so check the week before you go just in case there is something going on there. it’s not the first time that I have the dinner of a wedding there or other kind of even. I have to say that be able to hit the sauna after the dinner is a plus.

. After that, the fork was set as a Subversion repo and store in a local server. To bring those changes back to the original repo, I had to set it up as a non related branch of the origi...